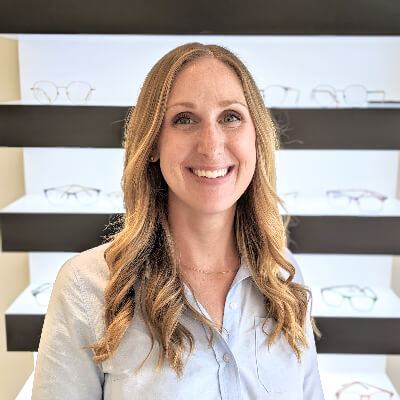 Dr. Erin Wallace is excited to join the team at Peninsula Lifetime Eyecare! She was born and raised in London, Ontario. After completing her Bachelor of Science degree at the University of Guelph in 2011, she went on to study optometry at the University of Waterloo School of Optometry and Vision Science. During her studies, she traveled to Asunción, Paraguay where she provided free eye care to hundreds of people in need. In her fourth year of school, she completed an internship at OMNI Eye Services in Atlanta, Georgia. In 2015, she proudly became a Doctor of Optometry, graduating with Dean’s Honours and receiving the Dr. Irving Baker Excellence in Clinical Optometry Scholarship. Erin is happy to welcome all patients to the office, but she has a particular interest in pediatrics and ocular disease.

After practicing optometry in her hometown of London for four years, Erin decided in 2019 to move to British Columbia with her partner, Dr. Brendan Wallace. In August 2020, Erin and Brendan were married in Brendan’s hometown of Kelowna and they are now both thrilled to be practicing at Peninsula Lifetime Eyecare together.

When not in the office, you may find Erin doing yoga, playing volleyball, skiing, biking, reading, hiking, or spending time with her beloved cat, Sam.