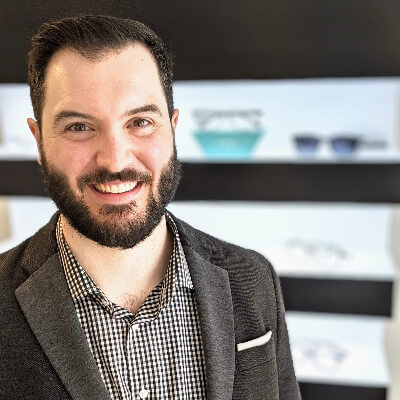 Dr. Brendan Wallace is originally from the Okanagan where he received his Bachelor of Science degree with Honours in Forensic Psychology from UBC in 2011. From there he traveled to Waterloo to get his Doctor of Optometry with Honours in 2017. Some highlights of his optometry degree include being class president, a volunteer eyecare mission to Peru, an ocular disease and therapeutic rotation to a VA hospital in Oklahoma, and meeting his fiancée.

After graduating he began practice in London, Ontario where he found passions for dry eye management, specialty contact lenses, ocular disease and children eye exams. It took two visits to Victoria for Dr. Wallace and his fiancée to fall in love with the island and moved here in 2019. He is now a proud member of the British Columbia Doctors of Optometry, the BC college of Optometrists, and the Canadian Association of Optometrists.

Out of the office his interests include traveling, skiing/snowboarding, hiking, and cooking something new in the kitchen. He is thrilled to be working at Peninsula Lifetime Eyecare Centre and hearing about new places to explore on the island.